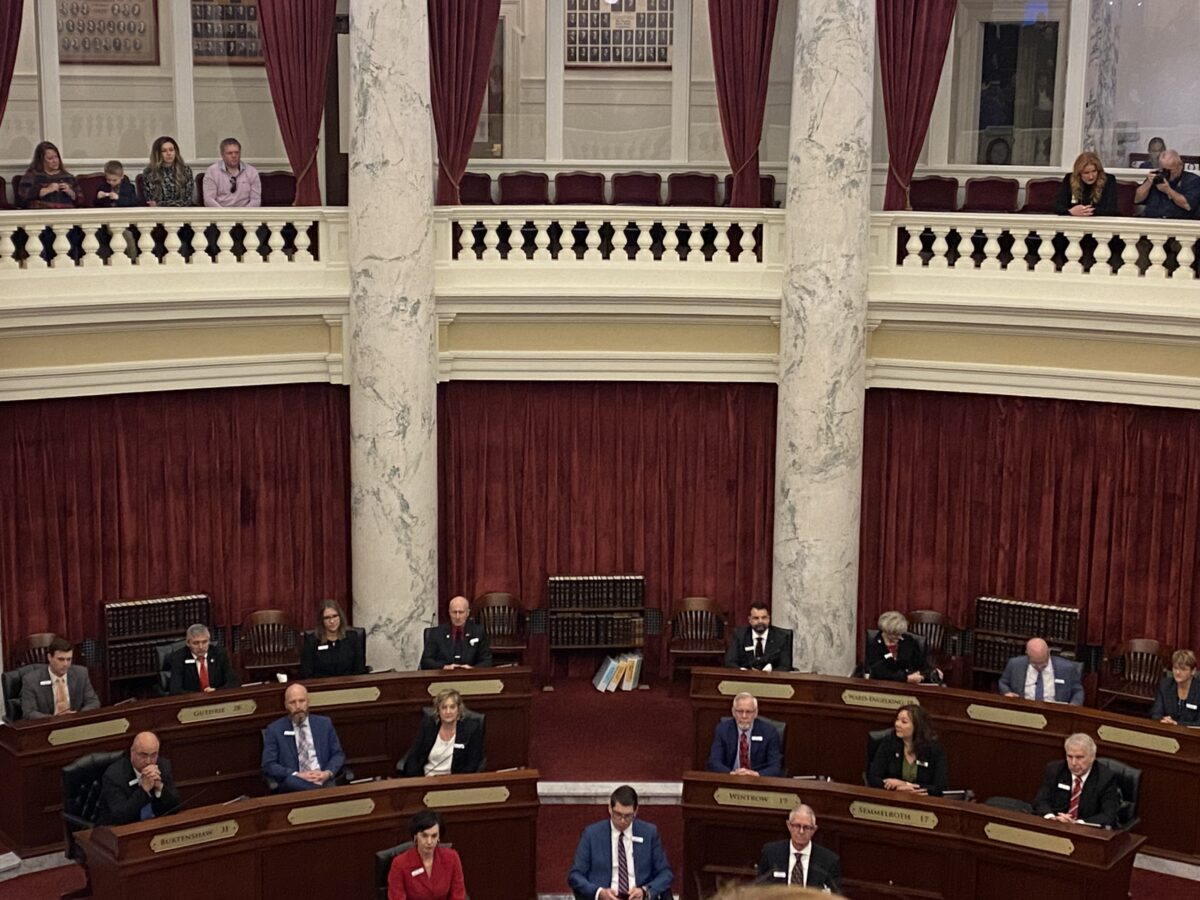 “For if you keep silent at this time, relief and deliverance will rise for the Jews from another place, but you and your father’s house will perish. And who knows whether you have not come to the kingdom for such a time as this?”

6 For to us a child is born, to us a son is given; and the government shall be upon his shoulder, and his name shall be called Wonderful Counselor, Mighty God, Everlasting Father, Prince of Peace.
7 Of the increase of his government and of peace there will be no end, on the throne of David and over his kingdom, to establish it and to uphold it with justice and with righteousness from this time forth and forevermore. The zeal of the Lord of hosts will do this.

As I reflect on the birth of Christ and the verses in Isaiah, only our Savior of the world could bear the weight of the government.

The Legislation orientation was everything I thought it would be. It was information overload and the reality of the tremendous weight of responsibility that 105 of us will carry for Idaho was at the forefront of my mind.

Our first day on the Senate side kicked off with a lunch on the first floor Rotunda of the Capitol. It was beautifully decorated for Christmas. Then we went to the Lincoln Auditorium to begin an orientation that included:

We started day two with breakfast in the capitol Dinning Hall. We were then separated into five different groups to learn:

Are you feeling the information overload yet?

Day three was devoted to:

On day four, I was sworn into office, and the Senate established seniority. Those who are returning in order of terms, then those who returned with their preceding number of years, next those who had years in the House Chamber, finally all incoming freshman with no preceding terms were put in a jar and drawn. We should have went alphabetically; I would have had almost the same results! Only Senator Taylor (D) has less seniority than me.
We selected our seats by seniority, which left me Former Senator Zito’s chair, the only place left for Republicans. It will honor me to sit in her Senate chair!
We received our choices of committees by seniority, (I was last in this process because it is done by party).
*We adopted our office by seniority. Most of the offices are in the Republican wing, with only two offices in the Democrat wing.  Being the last two, Senator Trakel and I knew we would be in those offices. Being the gentleman he is, he gave up his position in seniority to allow me to pick before him, which allowed me to pick once again Former Senator Zito’s office. I said she had given me her fridge, so this will save us from moving it to another office.

Because of my Vice Chair position, day five was a half-day session on the responsibilities of the Chair and Vice Chair. Finally, I returned safely home and slept in my own bed.

Merry Christmas from your District 24 Senator and House Representatives!

Representative Dixon will be serving on Local Government, Health and Welfare and Judiciary, Rules, & Administration committees.

Senator Zuiderveld will be serving as Vice Chair of Health and Welfare and sitting on the Agriculture Committee.

October 28th as I walked the steps of our capitol, a since of awe overwhelmed me. The journey to this point has grown my faith, built up my obedience to the Lord and bolstered my courage.  As I stated in the verse above, I see God moving and recognize that He has put many of us in these rolls for a time such as this.

I plan on sharing my journey in every newsletter in hopes that my testimony will encourage you all to go out of your comfort zones and allow God to do great things through you.

I have determined to read scripture every morning before I do anything else. I pick a verse from my reading that comforts me and I write it on the inside of my middle left finger.  December 1st, my verse was Proverbs 16:9:
“The heart of man plans his way, but the Lord establishes his steps”.  I witnessed this the entire day, as men and women tried to make plans, God was directing their ways. After taking the Oath of Office we stood along the back wall to await picking our new seats on the Senate floor. As I mentioned, it is all done by seniority. When it was time to draw names for the incoming freshman with no previous terms, my mind wandered to the Old Testament practice of drawing lots.  My lot was 34 out of 35 in seniority with only Sen Ron Taylor(D) below me.  When it was time for me to pick a chair there were only two options. Since I knew that the Democrats are all seated together, I was left former Senator Zito’s chair.  It went from one “Z girl” to the next.  As I sat down and looked up at Senator Zito, who was in the gallery, I smiled.

When all was said and done, and I sat in my new office chair, I was blessed with a view I didn’t expect. The building across the way reflects the Capitol. Gods plans are truly better than my own.