This was like a play out of Pelosi’s playbook. They put one subject with the other they knew would pass because they knew it wouldn’t pass on its own. 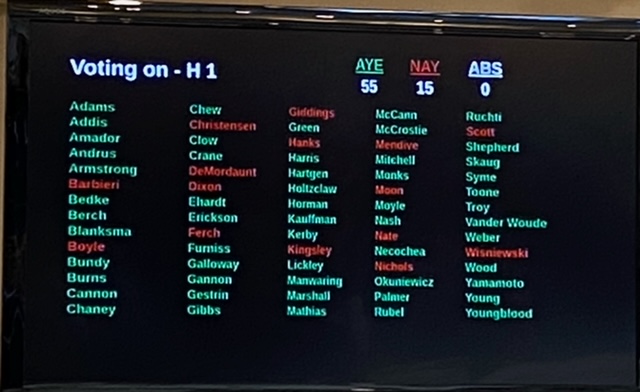 A young teenage boy wants to see a movie because “all of the kids at school are talking about it.” However, his parents are very strict and will not let him see movies that they deem inappropriate for him. The parents tell their son that they don’t want him seeing movies full of sex and violence. So the boy does a little research on the movie and discovers that there is little violence and/or explicit sex in the movie, and he returns to his parents with this new information. The parents say that they will think about it.

That same evening, Dad makes some brownies and offers some to his son, saying, “I made these brownies for you. I used an excellent recipe, and I added only a little dog poop to it. Do you want to eat some?” When the boy predictably refuses to eat the brownies, his father asks, “If you won’t eat brownies with just a little dog poop in them, why do you want to go see a movie with just a little inappropriate sex and violence?”

The reason I am sharing this story is because this is what I thought of the special session today. Many talked about how the process of presenting this bill was unconstitutional and should be separated. You can go look at all the testimonies given by the current legislators. It bothered them, they made sure to let you know. They sacrificed their oath to the Constitution, which states,

They have compromised themselves.

If they can excuse breaking this constitutional amendment, it will be easier to break others down the road. Which one will be next? Will they ignore what the constitution says on water, education, taxation, etc.? If you can’t trust them to uphold their oath on one issue, how will you ever trust them with the others? They should have separated the two bills and voted on them individually. But they didn’t.

This was like a play out of Pelosi’s playbook. They put one subject with the other they knew would pass because they knew it wouldn’t pass on its own. You are all going to receive a very small tax break and the schools are going to get another $410 million on top the the 42% fundingincrease they received over that last two years. The Senate votes were all yes but one: Senator Christy Zito alone voted no. The few nay votes in the House and the lone one in the Senate were cast because those legislators would not compromise their oaths of office. If the special session had been conducted such that the subjects addressed in the bills had been separated, you would have seen those who voted nay on this bill vote in favor of the tax relief we all so desperately need.